Now THIS is a bike trailer!

If you’ve put long bike rides on hold because your kids are too young to bike alongside you or big trailers are too clunky to tote on a major ride, you’ll dig this cool bike trailer that makes family bike outings a cinch. Called a Weehoo, this trailer is great for kids of all ages and biking abilities and is easy to set-up and pull along. Now, go find those bike shorts and rediscover your inner weekend warrior. 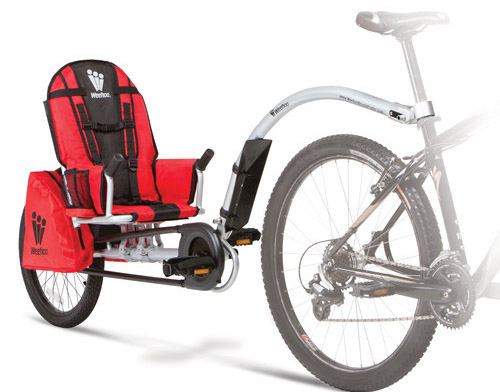 What it Does
Weehoo is a bike trailer that lets kids pedal, sleep, eat, drink, enjoy the scenery and, most importantly, be with you, while you ride. While traditional bike trailers leave kids looking like ancient Pharoahs, being toted in an enclosed litter, the Weehoo is designed to look and act just like a real bike, so kids can get some exercise and be out in nature, all while safe and secure.

Sometimes the best memories come from those times when you decide to give up making plans and just let the day happen.

Ready to hit the trail.

With the husband out of town and the bigger kid not around, E and I had Memorial Day to ourselves. The weather was scheduled to be rain-free for most of the day, so I decided that a bike ride was in order. Our hand-me-down bike trailer was already hooked up and ready to roll, so I consulted the Trail map and decided a simple out-and-back bike ride on the Cedar Lake Trail would be a good morning activity.

The bike trails of the Twin Cities are legendary for their ease, proximity and extensiveness across the metro area. The Cedar Lake Trail has the added draw of the lovely Depot Coffee House, where bikers and neighborhood folks gather before, during or after their ride. 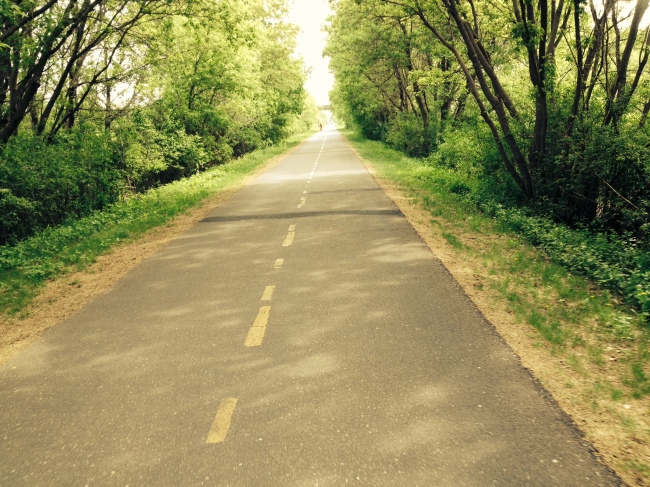 Paved and shady. A great bike trail for hauling kids!

So on my ancient, broke-ass Schwinn and hauling 50 pounds behind me, we set off. I didn’t realize how much that extra weight and limited gears would slow me down, but we weren’t trying for time. And the more deliberate place forced me to slow down and really have a chance to observe where I was.

As we entered the trail near the NordicWare factory, a pair of geese and their goslings greeted us. It looked like they had set up a nest somewhere next to the factory. (Maybe they get free bundt cake?)

Our escorts for a portion of our bike ride.

One of the parts of urban trail bike riding that I like best is the chance to see a familiar place in a whole new way. We biked over Minnehaha creek, next to St. Louis Park’s beehive monuments (which I’ve always wondered about when I pass them on the highway) and through wooded areas I never knew existed. The trail was full of other bikers, runners and Rollerbladers, but never felt crowded.

Returning from our half-way point, I noticed that all the bikers were smiling at me. “Isn’t it nice that bike riding puts everyone in a good mood,” I thought. Nope, they were bemused by E in the trailer. The fresh air and gentle movement had put him to sleep and he was curled around the harness and slumped over, snoring.

He woke up as we entered Wolfe Park. We pulled in to the playground—they have equipment for both big kids and pint-size versions for toddlers. He played for a bit, but then heard music….We had stumbled upon the Memorial Day concert. E and I sat on the grassy steps and listened to the St. Louis Park community band play a variety of patriotic songs and a medley of Lerner and Lowe. E loved it and sat still, just watching the band and listening for about 20 minutes.

Note to self: More community concerts. I’m sure if I had tried to plan it as a specific outing it wouldn’t have been nearly so special. But because it was pure happenstance that brought us there, we could enjoy it for as long as E’s attention allowed and then move on to the next thing with no pressure.

All in all, a great way to kick-off summer.

The coolest chicks are always drummers.

Choices for both the old-school and the adventurous.

That’s what the Husband told a kid sitting on a bench outside the ice cream parlor as we made our way inside. The kid was already covered from nose to chin in blue drips (the Superman flavor, would be my guess). They came inside later and his mom told us that clearly we had given their family a new catch-phrase, since she had now heard it about 20 times in the last 10 minutes.

Spreading joy, that’s what we do. 😉

Always on the lookout for easy, jump-on-the-bike-and-go outings, we ventured away from the Dairy Queen just a few blocks from our house and headed to a quiet corner of Edina, Minnesota to grab a cone at The Neighborhood Ice Cream Shoppe. Any place that spells “shop” with two p’s and an e is suspect, but when ice cream is involved, I’m willing to overlook it.

While the Twin Cities is full of amazing ice cream places (and Izzy’s will always be my go-to for when I want the exceptional) sometimes you just need the basics, with prices to match.

Sandwiched between a Pappagallo store (?) and a dry cleaner, this ice cream shop has a surprisingly large selection of Cedar Crest ice cream, a few frozen yogurts and sorbets and sherbets. They also have pint-size tables and chairs, benches outside and a fast-moving line—perfect for the neighborhood families who stop in after dinner or on their way home from sports practices. Oddly and yet kid of awesomely, you can also get Heggie’s pizza here, so really, a cheaper date night could not be had anywhere else. 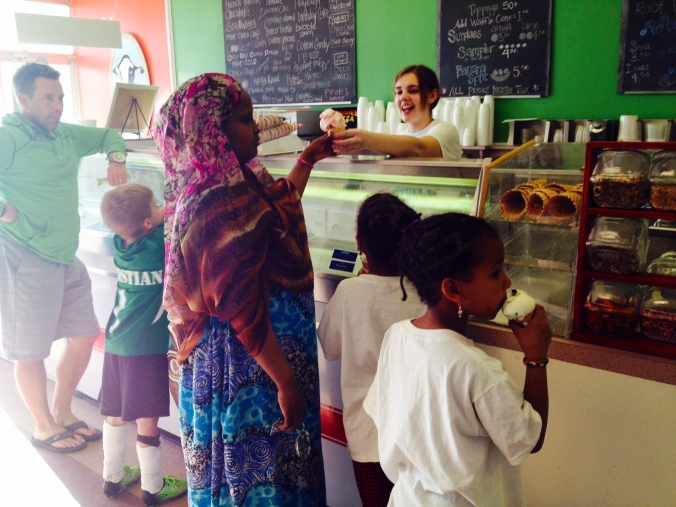 You’d be hard-pressed to spend more than $3 for a cone, as the single scoop is quite generous. I got a single kiddie cone for $2 and it was plenty. I LOVE places that allow adults to order the kid size. It’s also located on a road that has a dedicated bike lane, so you can off-set the calories with your travel. Perfect combination, in my book.

The secret to toddler-ice-cream-cone success? The sample spoon!

Last weekend I ran a race in Robbinsdale, Minnesota. Considered a first-ring suburb of Minneapolis, I had never really spent any time there (I grew up in another first-ring suburb. Hey Roseville!) so it was at the invitation of a co-worker that a few of us signed up for the Birdtown 8K.

Friends and finishers of the Birdtown 8K

It turned into quite the eye-opener for me. Not only did the mayor run the race–in a kilt, which he promised to do if a certain number of runners signed up–but everywhere you turned you heard the excited greetings of friends and neighbors bumping into each other. It seems like everyone knew everyone else and there was a real feeling of community support that, unlike other, bigger suburbs, wasn’t united solely by kids’ sports.

The race was fun, the day was beautiful, (And the co-worker-hosted after-party? Stellar. Apparently the carrot I’m willing to run for is the promise of pastries and a Bloody Mary bar.) and I got to explore a bit of Robbinsdale. The race toured around two lakes and their parks as well as main street.

That’s the kicker. Robbinsdale has a wonderful, small-town feel main street. Something my hometown sorely lacked. Because the town was established in its own right before the post-WWII sprawl and housing boom, it maintains the character of the past. And the community has clearly embraced it. Anchored by some very popular, very progressive restaurants like Travail and Pig Ate My Pizza, it seems that Robbinsdale could be the new sleeper destination for hipsters ready to put down roots and have families.

I’ve recently been doing my best to re-up my fitness level. I’ve signed up for a few 5K races around town and been jogging around the neighborhood (Yup, that person on the sidewalk flailing like Phoebe on “Friends”? That’s me.) Going down the Internet rabbit hole looking for running routes, I found this company: City Running Tours. They give tours of great U.S. cities by creating a 5K route that showcases the historic and off-the-beaten path landmarks.

They have tours in many major cities, including New York, San Francisco, Portland, Austin, Chicago, Boston, Seattle, Washington, D.C. and Minneapolis. (I would like to proudly point out that the photo for the Minneapolis route is the only city that uses a brewery.) 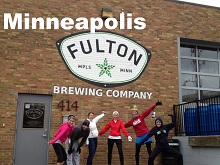 Prices start at about $25 and go up to around $40 for beer tasting runs.

This seems like the perfect thing when traveling when you might not want to run alone for fear of getting lost and the guides carry all your stuff so you don’t need to worry about having your phone/wallet/keys/water with you.

I think the next time I travel for work I might just do a little urban exploration at a slightly faster pace. 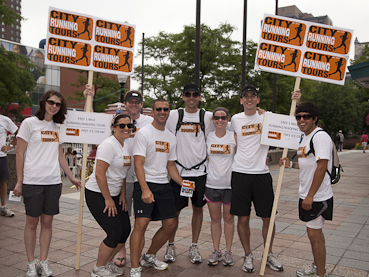 Anytime is nap time with the right gear.

When you’re even a bit off the beaten path, the big SUV stroller isn’t going to cut it. While great for malls, sidewalks and airports, we have dirt paths, cobblestone streets and tight quarters ahead of us. The little legs of a three-footer can only go so far–or too far. Traveling with toddlers means both energy and containment are going to be issues. We do have an umbrella stroller for some outings and city exploration (a completely disposable one purchased on sale for $20 at Target. And bonus: it looks like a shark so E truly enjoys riding in it.) But for the most part, we have found the secret to toddler travel success is a really sturdy backpack. Even better, ours was a hand-me-down from a similarly adventurous family. So it was road tested, yet still in terrific shape.

We carried E along mountain trails, zig-zagged through street festivals and up and down dozens of flights of stairs without a problem. He got a great view, up and away from dirt, feet and dogs. He often fell asleep in it, which while not ideal, is of course better than no nap at all. And it help a TON in the storage pocket, so all the diaper stuff, bottles and toys were with E, which meant the parents could split up without accidentally stranding one with a fussy baby and no supplies.

I’ve seen a few other products that are worth exploring. This belt system from Obi-Baby-Carrier seems to work for bigger kids and eliminates the bulk of the backpack, which would be great during the to-and-from. It’s compact enough to throw into your daybag as an option for kids who get tired along the way.

This year’s beehive is well underway! We’ve been experimenting with backyard beekeeping for a few years now and this year looks to be the most successful–because we didn’t have to start from scratch! In the past we’ve lost the popular over the winter due to our own inexperience or circumstance. But this year the hive made it through the winter–with more than one Polar Vortex to endure. Hooray! So, to build on this momentum, we are adding a hive to the family lake cabin as well. The plan is to start the second hive in the backyard and then transport it up north once a bear-proof enclosure is constructed. (We tried at-the-cabin bees before, but the bears destroyed the hive and the colony swarmed and left.)

Luckily the backyard hive is already gathering pollen from neighborhood plants and flowers, because we are down to our last quart of honey. When you have it, you use it, and we use quite a bit: as sweetener in coffee and tea, on oatmeal and pancakes and as a sugar substitute in baking.

Get to work, you busy bees! 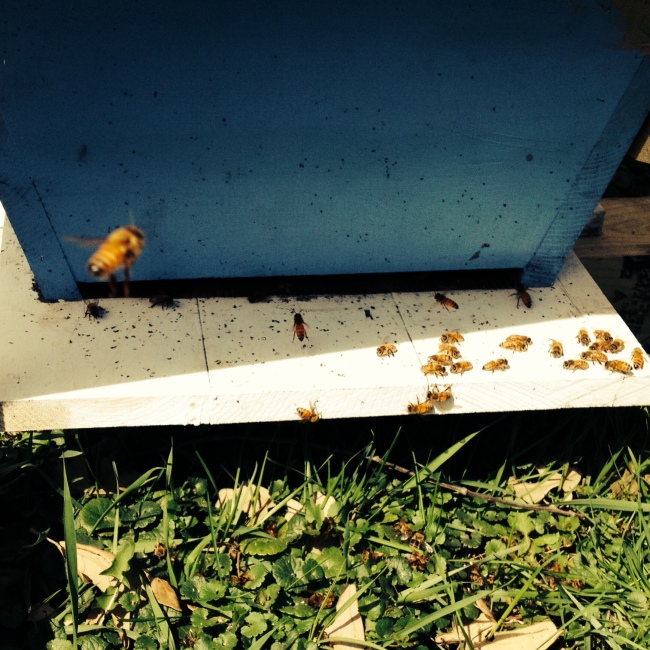